While there is no single medication that you can take to improve M.E. as a whole, some medicines that might be able to help with individual symptoms or aspects of M.E. These can include melatonin for sleep, and amitriptyline for pain.

If you are still having problems getting off to sleep even though you have sorted out your sleep hygiene, some doctors may recommend trying melatonin.

Melatonin is a hormone produced by the pineal gland in your brain – mainly at night – and is important for controlling your sleep and your biological clock. A man‐made version of melatonin can be taken as capsules, which can be taken whole or by sprinkling the contents onto a spoonful of food or drink (unless you have been Circadin, which is a slow‐release version and must be swallowed whole).

If you are given melatonin, the dose is usually 2.5mg or 5mg at night, depending on your weight.

This is usually given once a night about half an hour before bedtime, and you need to be ready to go to sleep ‐ resting in bed and not being busy around the house. In some cases, it is given in higher doses (between 3mg and 9mg).

Melatonin appears to be very safe, but its use in M.E. is relatively new, and we do not know whether there are long term side effects. There are no large studies in this patient group, so we may not know about rare side effects either. Although it's unlicensed (which means it's not currently generally available) in the UK, it can be prescribed by specialists.

If you don't notice any benefits after taking it for about six weeks, stop taking it. Sometimes it works well at first, but the effects might wear off after a few months. If this happens you can try taking it on alternate days which may help, or have a break for a few months and try again - make sure you discuss this with your doctor first.

Some doctors use the drug amitriptyline to help people with M.E. manage their pain. As it also makes you sleepy, it is particularly useful for young people who have pain and cannot sleep.

Although amitriptyline is an antidepressant if used in a larger dose, that isn't why it is used for M.E.

If it's prescribed for you, you'll be taking a relatively low dose, usually starting between 5mg and 20mg and slowly increasing up to 40mg or 50mg (depending on your weight). You will be asked to take it once a day, and as it will probably make you feel sleepy it is best to take it in the early evening with your meal. Do not take more than the prescribed dose, and keep your tablets out of reach of young children.

Side effects at this small dose are unusual, but some people do say they can feel generally unwell with it. If this is the case, you can ask your doctor about reducing the dose to 5mg a day, and then increasing it gradually back up to your original starting dose. 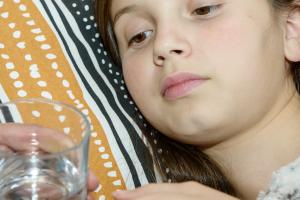 Donate now and change a life