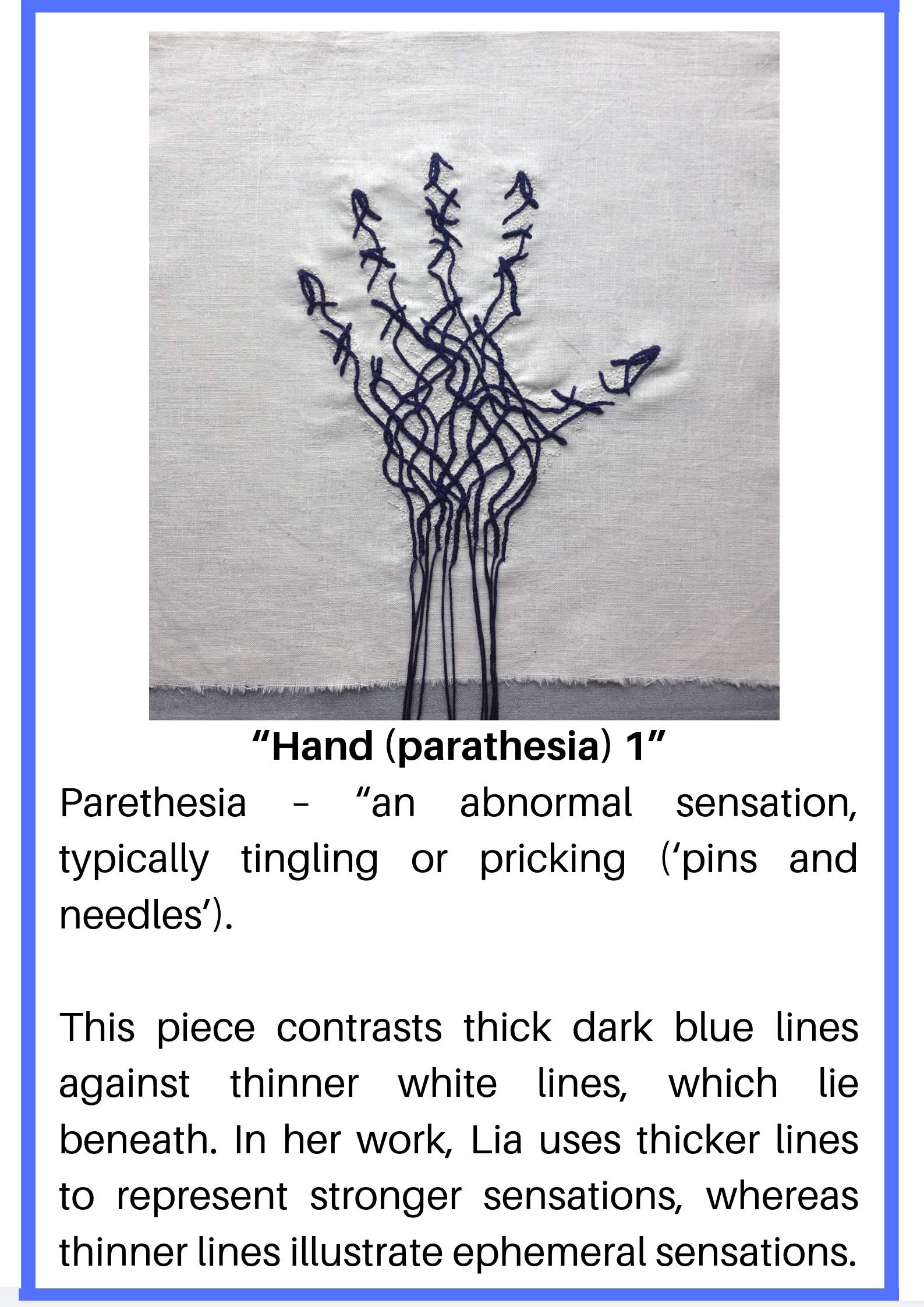 Lia Pas is a Canadian artist who uses what she calls symptomatology embroidery to understand and explore her M.E./CFS. A condition invisible to those who do not live with it, Lia’s work captures the physical sensations of M.E./CFS in a beautiful and illustrative way.

“I took up embroidery as a restorative creative practice a few months into becoming ill with M.E./CFS,” Lia explains. “I got the idea to start embroidering while watching a period drama where a woman was told "to take to her bed and work on her embroidery" in order to recover from a fainting spell.

“The idea to illustrate my neurological symptoms in thread came to me a couple months after learning to embroider. I was meditating during an intense episode of paresthesia (tingling) using a meditation practice focusing on the discrete sensations in the body to reduce the feeling of overwhelm that comes with them.

“During this meditation I started to see the lines of paresthesia in my hands as embroidery stitches and most of my symptomatology pieces have followed in the same vein.

“The act of embroidery calms my system because it must be done slowly and I can do it reclining. Embroidering my symptoms and sensations is a meditative practice very related to the one I described above. It allows me to experience the symptoms as just physical sensations and to become emotionally indifferent to them.

“So many of the neurological symptoms of M.E./CFS are things we are forced to live with on a day to day basis, and this practice, which my psychotherapist described as giving "exquisite attention" to my symptoms, has helped me to be at peace with what my body is experiencing.

This isn't to say that I ignore my symptoms, or that I don't do all I can to lessen them. It's rather a way of living in ease with them as opposed to becoming overwhelmed, anxious, or resentful of them.

“Since my M.E./CFS onset I have gone from severe/moderate to moderate/mild symptoms and my symptomatology embroideries are a sort of visual diary of self portraits mapping out this process.”

As part of her embroidery, Lia has produced a number of pieces including ‘Body Map,’ (pictured left) which recently received a lot of attention on social media. The work features an outline of a woman; her body is covered in markings of squiggles, dots and lines – all in an array of colours. Her face is covered in green lines that travel down her shoulder and neck. Each stich represents a sensation of M.E./CFS.