Tools to help you talk about your M.E./CFS

Whether you’ve been newly diagnosed or have been living with M.E. for some time, telling friends, family, children and colleagues about your condition can feel like a daunting task. As a largely misunderstood and invisible illness, some people with M.E. have reported that when talking about their M.E./CFS they have faced misbelief and dismissal.

The feeling of loneliness is not just caused by being alone but also disconnect from those we are surrounded by. When there is nobody there who understands how your condition affects you on a day-to-day basis, it is easy to become isolated. As part of Loneliness Awareness Week we’ve put together some tools that you can use to explain M.E./CFS to those around you.

The Spoon Theory is a popular metaphor used by people with M.E. to explain their disability. The theory uses spoons as a way to demonstrate how people with chronic illnesses have a reduced amount of physical and mental energy available for activities of living. This analogy was coined by Christine Miserandino, an American woman living with lupus and is widely used within the disability community – you may have seen the term 'Spoonie' being shared online.

In an article shared on The Mighty, Christen Jeschke uses the Cell Phone Battery analogy to describe her CFS. In this theory she compares her energy levels to a faulty battery which struggles to recharge. Whereas people without chronic illness function at 100 percent battery that drains at a slower rate. 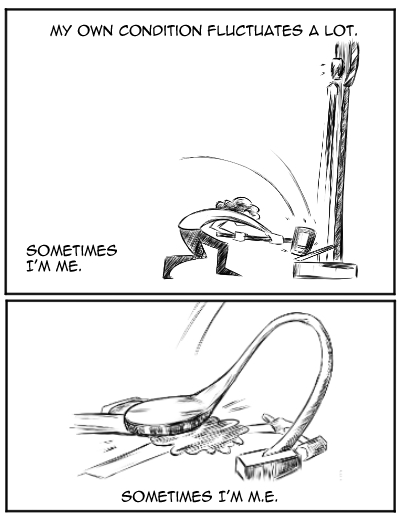 Rosa Devine was an aspiring dancer when she was diagnosed with CFS at the age of 16. Bedridden, she found a new passion reading and creating comic books. Recently, Rosa produced a comic which depicts what it is like to be diagnosed with CFS at a young age and the realities of living with a chronic illness. You can read it here.

What is it like to live with M.E./CFS by Anna Ross

As part of M.E. awareness month we worked with Anna who has M.E./CFS to produce a series of three videos. In these clips she speaks about her journey to diagnosis, how her life has changed, her experience with symptoms and the stigma that she has endured as a result of her condition. These are available on our YouTube channel.

Available on Netflix, this 2017 documentary film follows Jen Brea and her husband along her journey with M.E./CFS. In this film she speaks about the harsh reality of living with an illness which has little known about it and the implications this has on the lives of those affected.

What people say it feels like living with M.E./CFS by Not Just Tired

As part of M.E. awareness week, blogger Not Just Tired asked people living with M.E. to tell her what it feels like to live with M.E./CFS. She collected their responses and created a blog where you can read their answers.

Unfortunately, some people may still be unable – or unwilling – to understand what it’s like to have M.E. Remember that there are those that DO understand, and can offer support, be it Action for M.E., your local M.E. support group, or a forum such as M.E. Friends Online.